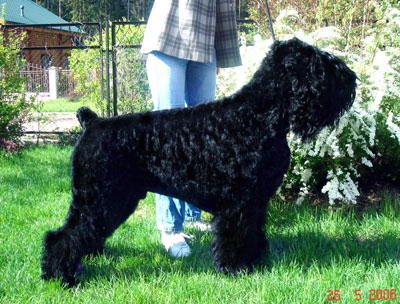 New version of our website is available at www.rusterrier.ru
Welcome!

Dar lives in a suburb of Saint Petersburg, Russia.
Dar is a Russian Champion. He is 5 years old.
Since his birth, one can see Dar is a worthy representative of his beautiful breed.

Dar is not just a really beautiful dog, he is also a remarkable working dog. He has taken courses in OKD (obedience) and ZKS (protection). He is protective by nature, concerned with guarding his owners. Dar always walks just several steps away from his owner, he has been working voluntarily as a bodyguard since he was a puppy.

Whilst training, Dar is quick to grasp anything. He is not just attacking with great pleasure, he is also employing real tactics. When on a leash, Dar is decoying the aggressor and once within reach he is attacking immediately.

He will withstand being stroked or even struck slightly, but as soon as he is allowed to attack� Dar is at his best � strong, dexterous, intransigent. But at the word of command he will let the �enemy� go immediately.

Dar is a dad of beautiful puppies out of Brenda's company Kapitolina, Aleksandra, Tineta and Best Guard Real Russian Bomb.